Outdoor-style water bottles are extremely popular in the US. This specimen from Eddie Bauer has a feature that is very cool, and quite literally so: it has a built-in cooling element, the likes of which you find in camping coolers. 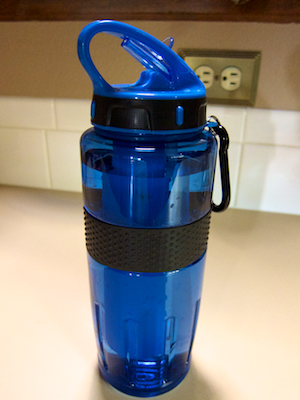 The cooling element is attached to the bottle’s lid with a bayonet lock. By twisting it versus the lid, you can easily remove it for putting it in the freezer. 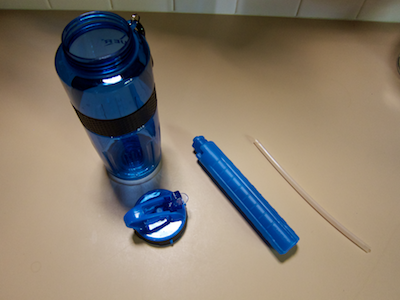 The cooling element is the only part that is not dishwasher-safe. Hence, being able to separate it from the lid also allows placing the latter into the dishwasher.

The bottle sports interesting design details beyond the cooling element, though.

Getting a good grip on the bottle

Thanks to a rubber band, you can still get a firm grip on the bottle, so it won’t slip through your hand. A rubber ring laid into the outer surface of the lid serves a similar purpose.

The band provides another function, although I’m not sure whether the designer consciously thought about this one.

When you close the bottle, the cooling element is submerged and displaces some of the water. You need to take this into account when you fill the bottle, of course, so it won’t spill over. 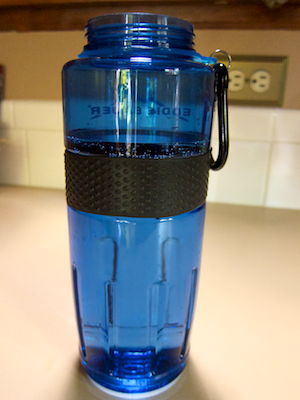 Filling the bottle to just above the top edge of the rubber band provides just enough room so as not to overfill the bottle. In other words, the rubber band also serves as a simple “tank full” indicator. The top-most image shows the water level in the closed bottle after filling it this way.

The design of the spout is pretty ingenious, too. 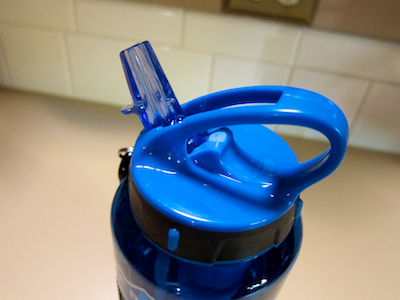 It neatly folds away into the bottle’s handle when closed. In that position, it shuts both the main drinking valve as well as the breather hole. 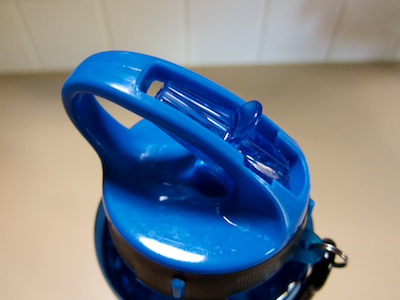 There is one drawback to this specific design, though: when you carry the bottle by the handle, chances are that your finger will touch the spout’s tip, and move it ever so slightly towards the “open” position. As a result, the bottle may leak, even though it appears to be fully closed. 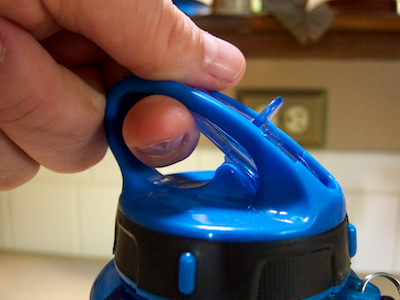 Worse yet, if you take the bottle along into the great outdoors, you will also transfer onto the spout any soil, mud, etc. that you may have on your hands. Next time you take a sip of water, you will ingest whatever’s on the spout’s tip — which is not that pleasant an idea, I’d say.

It is easy prevent the finger from touching the spout by slightly redesigning the shape of the finger loop, as seen here: 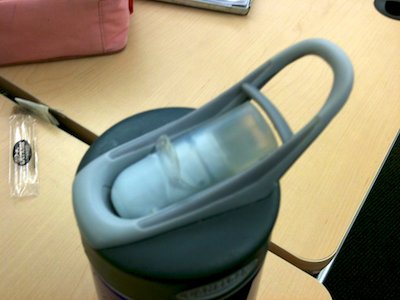 This bottle has an additional spout cover, so its opening/closing mechanism isn’t quite as evolved. Both the cover and the little plastic barrier effectively prevent you from inadvertently touching the spout while carrying the bottle.