It’s surprising how often my Macs fail to recognize a CD or DVD when I insert it into the optical drive. The disk is properly pulled into the drive slot and spins up, but its icon does not appear in the Finder.

In order to force-eject such a rogue disk, you have to restart the Mac and hold down the mouse button during the boot process. Before the log in screen appears, the disk will pop out of the drive. 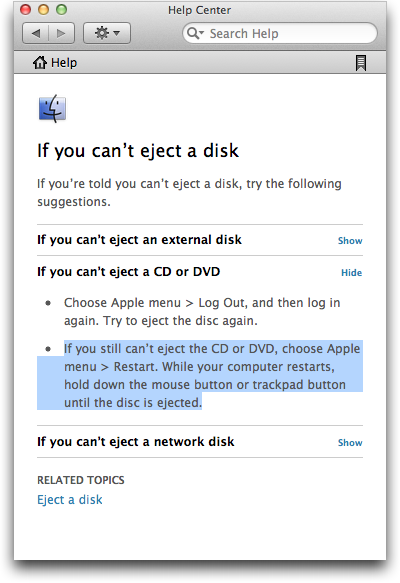 This brute-force method has worked for me every time I used it, but it is massively disruptive.

Imagine doing creative work on your computer. You have meticulously arranged numerous windows from multiple applications into a super-efficient workspace.

And now you have to close all apps and shut down the entire machine, just because the OS does not properly recognize a CD.

You can’t select what isn’t there, …

Why won’t the OS let me select some icon in the Finder and then execute the Eject command? Well, if there is no icon that represents the disk in the drive, how would you select it?

Part of the problem is that the Mac’s Finder differentiates between a (physical) drive and the (logical) volumes stored on that drive. This differentiation also applies to drives with removable media.

In the Finder you will only see icons representing volumes, but none for the physical devices. This is different on Windows.

On Microsoft’s OS, icons for drives with removable media like CD/DVD drives, etc. always appear, regardless of whether there is a medium inside that drive, or not.

In everyday use, there is a drawback to Microsoft’s design, because if you select such a drive while it’s empty, Windows will still try to read from it.

It takes a few seconds until the system recognizes that there is no medium inside the drive, and during that time you cannot continue working inside the specific Windows Explorer window. Which makes inadvertently clicking on an empty drive’s icon rather annoying.

There is one application on the Mac, however, that does let you access physical drives: Disk Utility. 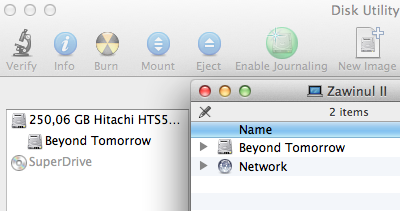 As you can see in the screenshot, the Finder only displays the volume — “Beyond Tomorrow” — for the computer’s internal hard drive.

In Disk Utility, in contrast, you can also access the physical hard drive as well as the optical drive. The latter is grayed out, since there is no medium inside.

This application would be the logical place for offering an Eject command that operates on the drive, not the medium. Such a function would force-eject whatever is inside the drive, regardless of whether the Finder has properly recognized it, or not.

In fact, this function should probably be deactivated, unless the Finder failed to recognize the disk, so that the user has to properly eject mounted disks to avoid data loss.

Then again, most users will have no need to ever use the Disk Utility application. They may even be scared by it due to its deep-down-inside-the-drives’-guts functionality.

A rare specimen: the non-evil time-out

That’s why I would like to see a different solution to this problem: A time-out!

As much as I loathe user interface time-outs in general, it would make a lot of sense for the computer to automatically eject a removable medium, if it is not recognized within a few seconds after it has been placed inside the drive.

Add in an error message window that informs the user, why the disk has been ejected, and you have a very user-friendly solution to an as-of-yet nasty problem.