More often than not, paying for a parking spot is a tedious affair: either you have to (hope that you) have enough coins on you, or you are confronted with a ticket machine whose designers were led more by the technical constraints inside the machine, than by the requirements of the user standing in front of it.

The experience with the parking meters in San Francisco is quite different: while the meters do accept coins, they also have a slot for pre-paid parking cards, which are available in $20 and $50 varieties.

Card in, observe, card out, done

To pay for your parking spot, you insert the card into the corresponding meter. At first, the display will show the current balance on the card for a few seconds, and then change to show the parking duration. 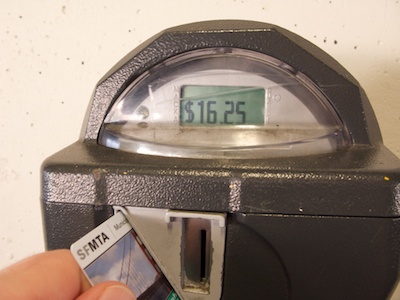 As long as you leave the card in the meter, the parking duration will increase in 7 or 8 minute increments (think “rounded 1/8-hour chunks:” 8, 15, 23, 30, 38, etc). The pace at which this happens is slow enough so you can easily follow along, and yet it is fast enough so you don’t feel like you have to excessively wait for the machine.

Once the meter displays your desired parking duration, you pull out the card, and you’re done. (On the next photo, note the chip symbol next to the card slot, indicating the orientation in which the card needs to be inserted.) 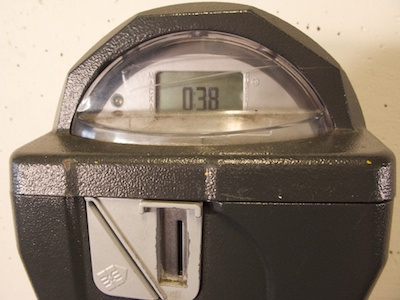 After I had taken the photos for this article, I realized that 38 minutes were not quite enough for what I was planning to do1, so I inserted the card again to see whether I could top up the meter, and it worked just fine.

In most cases, a dedicated meter is mounted right next to the corresponding parking spot. In others, you will have to pay at a vending machine, which adds a few extra steps, both in terms of walking up to the machine, as well as using it. Overall, though, this is the simplest and most convenient way to pay for car parking that I have encountered so far.

If you’re going to visit San Francisco and decide you want to buy one of these cards, you can find them at drugstores — I bought mine at the cosmetics(!) counter at a Walgreens — or via mail order directly from the San Francisco Municipal Transportation Authority.

Update 2010-10-07: Lars Feyerabend made an interesting comment about the chip symbol on the parking meter’s front panel:

I think the arrow is ambiguous. Representing the card or does it point to the side of the slot the chip should be at?

My intuitive interpretation of the symbol was that its arrow indicates the side that the chip should be on when inserting the card, i.e., the slot’s “south-western” edge.

Then again, the following picture was taken before the three others shown above, and as you can see, I was about to insert the card with the wrong side up. I had simply ignored the symbol altogether. 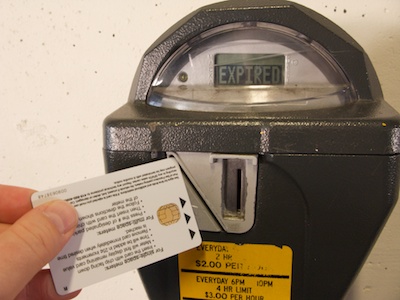 After musing over Lars’ comment, I wonder whether the chip symbol is as helpful for first-time users as I originally assumed. The good news is, though, that the meter will display an error message if you insert the card the wrong way, and does not fail silently.