This just in from the Department of Usability Improvements in The Most Unusual Places: the manufacturer of this toilet paper has come up with an ingenious design for indicating where the roll “starts:” at the point where the end of the paper trail is glued on, this roll sports a little fold. 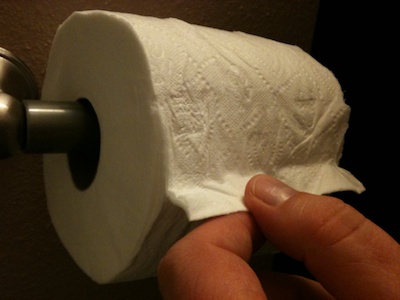 This fold makes it easy to see where the roll starts, and pulling on the fold conveniently breaks the glue bond.

What’s more, the fold can also be easily found by groping around for it. This not only makes it easier to use for the vision-impaired, but also improves its usability when used in one of the enclosed multi-roll dispensers often found in public restrooms.