For those of us who live in countries that observe daylight saving time, a little peculiar clock adjustment dance around the house has become a ritual that we perform twice a year. Going from device to device, we adjust all our clocks by one hour.

Most state-of-the-art computer operating systems can do this automatically or at least provide a simple checkbox to de/activate DST.1 Hardware devices like microwave ovens, video recorders, or alarm clocks, however, tend to require much more effort, since adjusting the clock on such devices usually is a tedious affair to begin with.

Enter the “DST hardware checkbox” which I found on an alarm clock radio. Thanks to this switch, adjusting the clock for daylight saving time (almost) becomes a no-brainer. 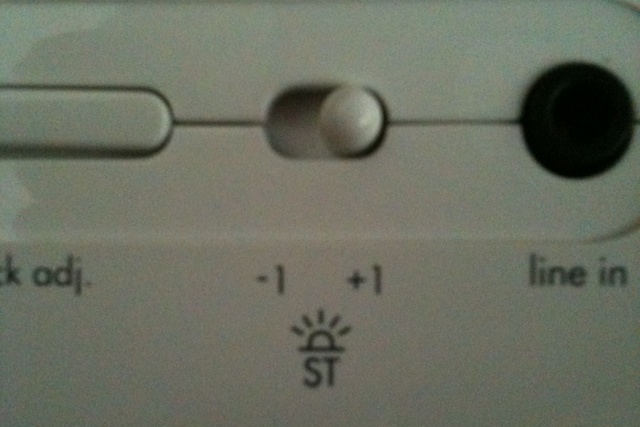 The switch is mounted on the back of the device, but is still easy to find, and the label is big enough to read. In fact, thanks to its location, it does not add any clutter to the UI elements on the front panel that users access much more often.

The switch could be made even more user-friendly by making its labels more meaningful. Unless you read the clock’s manual or just try out what that switch does, the “ST” label and the little “sun-rise/-set” icon may be a tad cryptic. Also, the settings “-1” and “+1” feel odd to any math-savvy technophile. 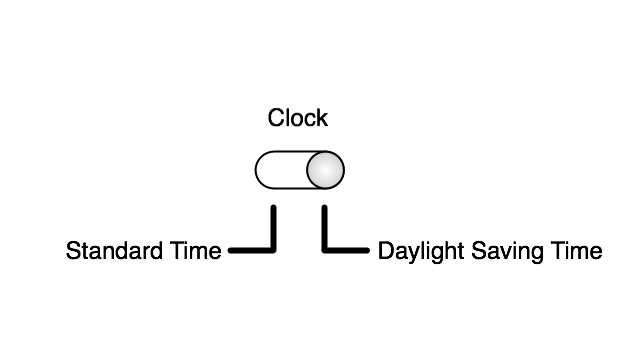 This would also provide a kind of “built-in documentation” for all of those people who, every time “ST” turns to “DST” or vice versa, have a hard time figuring out whether to set the clock forward or back by an hour.

Update 2010-11-19: Via email, Scott McIntyre pointed out a problem with the DST switch:

The tricky bit with the DST switch is that a naive user will just set the clock for the first time without regard to whether the switch is in the right position, since it doesn’t need to be set in the right position to get the clock to show the right time. So when DST time change comes around, the switch will either work magically (woo!), or will set the time the wrong way and be useless.

In that case, I would expect that the user has tried to make sense of how the device works by deducing the controls functions from their labels and/or by playing around with them. Had she read the documentation, she would have learned how to use the DST switch while following the setup process for the alarm clock (assuming that the documentation would explain the switch as part of the “getting started” instructions, that is).

It would make for an interesting usability test to analyze this kind of discovery process: ask people who are not familiar with the device to compile a list of its features, and explain how these features are accessed and operated — without letting them read the device’s documentation.

What happens when they come across a control whose function they cannot deduct from the control’s label: will they play around with it until they find out; will they eventually want to resort to the manual; or will they choose to ignore it altogether? And in case of the latter, will they go back to such a previously-ignored control later on to find out what it does, after all?

In a way, this goes back to two key usability concepts: “visibility” and “speaking the user’s language.”

A device that clearly communicates its feature set to the user through highly visible, clearly labeled controls, makes it much easier for the user to gauge the features’ importance, and decide which of them to use, and which to (consciously) ignore.

In that sense, a user who immediately understands that a particular control is used to switch between “standard time” and “daylight saving time” by just looking at the very switch itself, will either know what to do with that switch, or skip it. In which case I would expect them to ignore it in the future as well.

What’s more, a user who does use that switch in the scenario that Scott describes, would need to “grok” it just once, namely when incorrectly ”adjusting” the clock for DST by throwing that switch. When that happens, it takes a one-time correction of the device’s clock to ensure that it will work in the future.