Sometimes, intelligent design helps users avoid mistakes, even though the original reasoning behind it had nothing to do with the mistake the user is about to make. Take fuel pump nozzles, for example.

Just recently, I had borrowed someone else’s car, and to show my thankfulness, I had volunteered to refuel the vehicle. At the gas station, I was a bit lost in thought when I grabbed the pump’s nozzle and placed it in the car’s fuel filler neck. Or, rather, tried to, because the nozzle wouldn’t fit.

As soon as I looked down at label identifying the type of fuel for that nozzle, I was glad it wouldn’t fit, because I was holding the wrong nozzle: the car I was about to refuel has a gasoline engine, but I had instinctively reached for the Diesel nozzle, because my own car runs on Diesel.

What prevented me from filling the car’s tank with the wrong type of fuel is that the Diesel nozzle has a slightly bigger diameter than the one for gasoline: an insert inside the car’s filler neck effectively reduces the inner diameter of the neck, so that, even though you can insert both nozzles into the wider top section of the filler neck, you can only fully insert the narrower nozzle for gasoline. 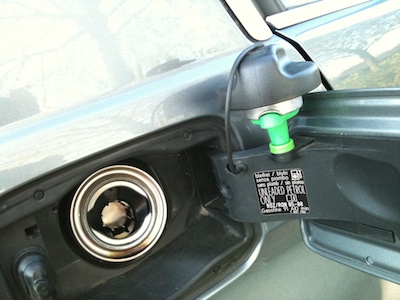 This design dates back to when unleaded gasoline was introduced in Germany. Pumps for unleaded fuel were equipped with nozzles sporting a smaller pipe diameter than those for leaded gasoline. In combination with the reduced inner diameter of the filler neck, this prevented drivers from filling up their cars with leaded gasoline, which would damage the catalytic converter, rendering it useless.

The nozzles for Diesel were not modified and retained a pipe diameter that was similar to the original, leaded gasoline nozzles. So, even though the original motivation for introducing a differently sized nozzle was about leaded vs. unleaded gas, and had nothing to do with Diesel vs. gasoline, it prevented me from filling up the borrowed car with the wrong type of fuel, which, in the worst case, might have caused major damage to the car’s engine.

As a neat extra, the insert in this car’s filler neck is equipped with a spring-loaded door that seals the pipe, and which is pushed aside when inserting the nozzle. This would prevent spilling fuel in case the driver would drive off after refueling without putting the filler cap back into place.

What’s more, if you take a closer look at the picture above, you can see that the designer also invested a lot of thought into the handling of the filler cap: by attaching it to the car with a cord, you cannot lose it or forget it at the gas station; while refueling, the cap can be placed in a round hole on top of the door’s hinge, so it does not get in the way when inserting the nozzle (which sometimes happens when the cap holder is located on the inside of the fuel filler door); and the bright green color of the inner part of the cap and the receptacle work as a highly visible reminder of where the cap belongs when refueling the car.