When staying at hotels, in-room strongboxes provide safe and convenient storage for valuable electronics like laptops and cameras. All you need to do to lock away your precious geek gear is to place it in the strongbox, close the door, and type in a four-digit code.

Type in the same code to unlock the strongbox, and that’s all there is to it. Or is it?

Typing in your code

Here’s the safe I found in my room while staying in Munich for the fabulous IA Konferenz last May. 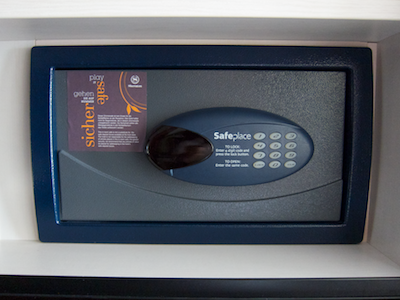 A four-digit LED display and a number pad are its only user controls.1 They are located on the device’s front panel. Concise instructions on how to use the safe are printed between the two. 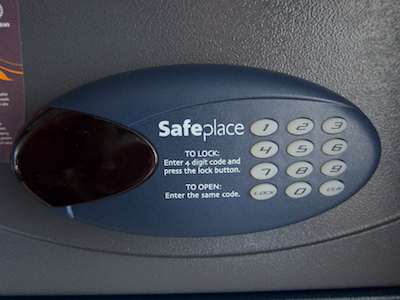 When you press any of the keys, the entire keypad lights up, so you can easily use the safe even if it has been mounted in a tight, dark closet compartment, or under dim lighting.

The number corresponding to the selected key appears in the display, whose number segments are bright enough to also be readable in less-then-ideal lighting conditions. 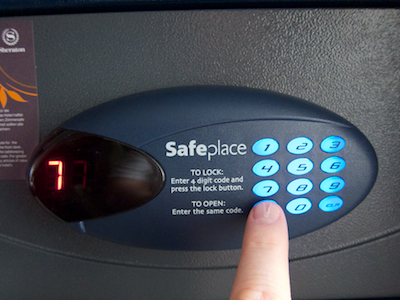 Every keypress is accompanied by a short beep, with each key’s beep having its own pitch. This may help visually impaired users with remembering and re-entering their code.

The “5” key at the center of the keypad features two small tactile “spikes” on its surface, which make it easier to navigate the keypad by touch alone.

Unfortunately, the designers of this safe decided to implement a very short time-out for entering the code: if you pause for a mere 2 or 3 seconds, the display goes dark, the keypad’s backlighting is switched off, and you have to start over.

Although the vast majority of time-outs constitute serious design flaws, this specific one does make sense, because it helps reduce the safe’s energy consumption by switching off the display and keypad backlighting. Its duration is simply too short, however: The user should have more time for entering the code than just a few seconds.

Your valuables under lock and key

To close the safe, you shut its door, type in an arbitrary four-digit code, and press the LOCK key. You then hear the lock bolt move into position, accompanied by an “animation” in the LED display, and followed by a mildly annoying confirmation melody.

To unlock the safe, you just type in your code again. The safe is unlocked immediately after you enter the code’s fourth digit, unless you made a mistake.

Although it is not mentioned in the instructions, the CLR key clears your recent entry so you can start over if you made a mistake. It is, however, possible to operate the safe without ever using this key. Ironically, it’s the short time-out that makes this possible.

You did it wrong!

The safe is a bit less user-friendly if you do make a mistake: Enter fewer than four digits before pressing the LOCK key, and “Er04” is displayed, and a not-so-mildly annoying error beep is played.

Since I did not encounter any other numbered errors, I wonder why the designers included the somewhat confusing number instead of displaying a plain “Err” message.

In case you enter an incorrect code, the safe responds be displaying “Code” and playing an error beep.

While I’m on the subject of the display: Interestingly, the mapping of the animation on that display, which represents the lock bolt moving inside the safe door, is reversed in this specific device.

In basically every door, the lock bolt is located opposite from the door’s hinges so that, when the door is locked, the bolt moves away from the hinges. On this safe, however, the animation moves towards the hinges (which are mounted at the left edge of the safe’s door) when it locks.

Apart from these two criticisms — numbered error code and animation mapping –, the only other idea I thought of while observing this device is to set the “LOCK” and “CLR” keys apart from the number pad and/or color them differently, so as to make them stand out more visually.

One socket to charge them

But there’s one more thing! And a seriously cool thing at that: this safe is equipped with an internal power outlet. 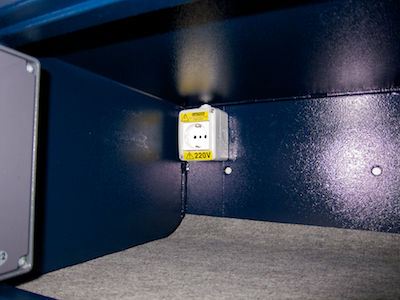 Thanks to this brilliant feature, you can charge your laptop while it is safely stowed away inside the strongbox. It’s one of those rather rare “I wish you’d see this everywhere!” ideas.

A hotel safe is a fairly simple device, and the specimen from Munich is as easy to use as it should be:

While attending Musikmesse in Frankfurt back in March2, I encountered a similar safe that had one additional feature. Undoubtedly, the designer’s intent when adding this feature was to make the safe more convenient to use.

As it turned out, this one feature made the safe more difficult to use.

This safe has a slightly different visual appearance, but essentially works the same way.

Unlike the other safe’s instructive LOCK and CL[EA]R key labels, this model’s non-numeric keys are labeled with generic pound “#” and asterisk “*” characters. It’s unlikely that you can predict what either key does without first reading the instructions. 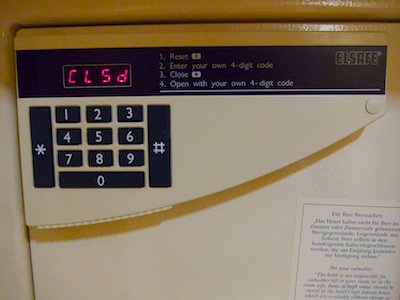 When you do consult the instructions, you learn that resetting the safe is the first step. The reason for this is that, while unlocked, the safe can operate in two different modes:

Successfully un-locking the safe makes it switch to mode 2. In this mode you cannot enter a new code, though. If that is what you want to do, you first have to press the pound key to switch back to mode 1.

As if that wasn’t confusing enough, there also is a timeout involved here, after which the safe automatically switches to mode 1 when you leave its door open for a longer period of time after un-locking it. And there is no status indicator for this “feature”, so you can only guess what mode the safe is in.

Consequently, it is impossible to tell whether pressing the asterisk “*” key will immediately lock the safe. In that case, the currently active four-digit code is not displayed — you better make sure that you properly remembered which code you entered, or you risk being unable to un-lock the safe anymore!

The instructions that are printed onto the front panel of the safe don’t mention this re-locking feature. Also, the instruction’s phrasing is a bit unfortunate.

For example, my initial reaction to reading “1. Reset #” was: “Yeah, but how do I reset this thing?”. Only after my brain made the connection between the “#” in the instructions and the key labeled with that character did it become clear that I needed to press the “#” key. Which begs the question why the instructions don’t simply state just that: “1. Press the # key”.

What’s more, without being aware of the re-locking feature, the reset step hardly makes any sense to begin with. Why can’t I simply tap in a new code right away?

When one set of instructions is not enough

Inside the safe, I found a cardboard sign with slightly more detailed instructions, and these also mention the re-locking feature. 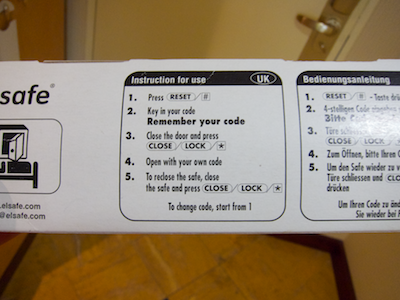 As you can see in the photo, they do not, however, mention the associated time-out. I guess that quite a few of this hotel’s guests press the “*” key, expecting the safe to lock — and are stumped by the fact that nothing happens at all. Because this “faulty” use of the device does not result in an error message or any other kind of feedback.

At first sight, the second safe’s re-locking feature appears to be a welcome convenience feature. But it is unreliable, because you don’t know which of the two modes the safe is in, nor when the time-out kicks in to switch back to mode 1.

When following the instructions step by step, entering a new code always requires the reset step even when the safe would be in mode 1 and, thus, accept a new code straight away.

And finally, unless you read and fully understand the additional instructions found inside the safe, the necessity of the first step will likely remain a mystery for you.

The first safe that lacks the re-locking feature may be just that little bit less convenient to use in some situations, but it is more user-friendly: Operating the device is more straight-forward and requires fewer steps; the instructions are simpler and shorter; and there is no guessing about any modes that the device may be in.

Especially when it comes to devices that many people will use for the first time, and then only use for a limited amount of time, it is more important that a device be easy to understand and convenient to use, than that it surprises more experienced users with more advanced features.