In a recent interview, the interviewer commented thusly:

That’s a typical, and typically hostile, view of skeuomorphism, and it makes you wonder why people generally feel so strongly against them.

Skeuomorphism is more than aesthetics

Most of the countless blog posts and articles about skeuomorphism seem to focus on the use of “rich Corinthian leather”, faux green felt, and fake wood in Apple’s iOS.

While that particular view on the topic may, indeed, warrant discussion, skeuomorphism in user interface design is not (just) about visual aesthetics.

Rather, it’s about designing controls that resemble those from older technology in terms of appearance and behavior, even if, technically, that specific design approach is not necessary anymore.

By tying into a user’s experience and familiarity with using older technology, newer technology can be more accessible and easier to use.

Here’s the more terse definition Wikipedia has to offer:

A skeuomorph is a derivative object that retains ornamental design cues to a structure that were necessary in the original.

For a user experience design point-of-view, let me add one word for clarity:

A skeuomorph is a derivative object that retains ornamental design cues to a structure that were functionally necessary in the original.

An example for skeuomorphism is the button layout of most calculator apps. Technically, a calculator app could accept entire free-form mathematical equations. Nevertheless, most such apps offer the familiar button panel with buttons for digits, operations, the equals sign, etc.

My favorite example for a skeuomorph is entirely non-digital: door lock pins in cars.

For a few decades, locking pins were the standard control for locking and unlocking a car door.

These pins would stick out vertically from the doors’ inside “window sills”. Pulling a pin upwards would unlock the door; pushing it in would lock them.

On the front doors, the lock pins were positioned towards the rear of the door; on rear doors towards the front. These mounting positions were not dictated by the location of the door locks themselves, but followed ergonomic considerations.

To this day, most cars only have outside key slots in the front doors. So, to unlock the rear doors in a car that does not have electric locks, you would unlock a front door, reach around the car’s “B” pillar on the inside, and reach for the rear door’s lock pin. If the pin would have been located towards the rear of the door, you would not have been able to reach it that way.

Besides “affording” the actual locking and unlocking operation, the functional design of the door lock pins provided a built-in status indicator. Pin is pushed in: door is locked. Pin sticks out: door is unlocked.

Want to check whether you properly locked the car? A quick glance at the lock pins through a car window is enough to find out.

The skeuomorphic angle to this story?

Most cars these days come equipped with electric door locks, which can be conveniently unlocked from a wireless remote. Therefore, there is no more need to use door lock pins.

And yet, some cars still provide door lock indicators in the same position of, and with the same appearance as, the now-unnecessary lock pins.

Here is an example from a BMW E46 3 series, showing the front door’s pin in the “unlocked” position. 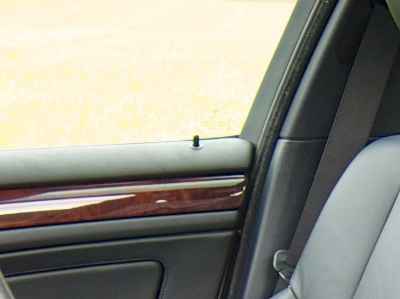 The pin’s only purpose is to reflect the door’s locked status. You cannot push it in to lock the door, and if the door is locked, the pin is recessed completely, so that it sits flush with its bevel. You literally cannot grab it, so that you cannot use it to unlock the door either.2

The button that actually operates the door locks in this car is located in the center console near the gear shifter. It’s far away from the doors, yet much easier to reach for both driver and co-pilot than the (now “fake”) door lock pins.

Just like metaphors, skeuomorphs are about transferring usage experience from one realm to another

BMW’s designers could have come up with a completely novel, totally original visual indicator. For example, they could have grouped four control lights together — one for each door — and placed them at the top of the center console.

These indicators would still be visible through the windows from outside the car. It would also be easier to check them for the people inside the car, because they would not have to turn their heads as they do for checking the “lock pins”.

Nevertheless, someone decided to give the “new” indicators the same visual appearance and mounting location “that were necessary in the original“. Even though they were not technically necessary anymore for the new, electrically operated door locks.

Here’s an important detail, though: Check out the position of the rear (“fake”) lock pin. 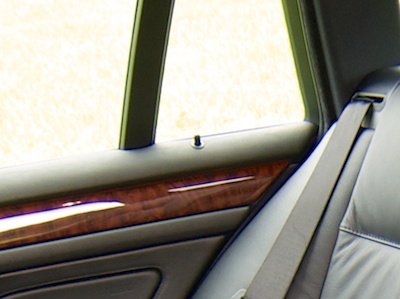 Now that there is no more need to actually reach the pins from the front seats, they have been moved to the rear of the door. However, the appearance and vertical position, i.e., the “design cues” of this “derivative object” are still identical to the “original”.

Dismiss skeuomorphism? At your own peril.

Like so many other UI design techniques, skeuomorphism is just another useful tool in a designer’s tool belt. Applied deliberately and in well-defined doses, it may be just what is needed to make a certain aspect of a system’s UI more user-friendly.

Outrightly dismissing any such tool as soon as a new contrarian design fashion comes along (“flat design”, anyone?), says more about a commenter’s narrow-mindedness than the tools’ inherent merits.