When you change an application’s settings, you sometimes have to restart the app before the change will take effect. I previously examined five ways of requesting such a restart.

For one of the apps featured in that article, the developers have noticeably improved this process — by implementing just two changes in the User Interface.

The problem of letting the user defer an application restart

LaunchBar is an “application launcher” utility. As such, it is constantly running in the background, waiting for user input.

The setting that requires the restart, is for hiding the app’s Dock icon. Without LaunchBar’s icon constantly showing in the Mac’s Dock and Application Switcher, navigating between all other running programs is easier and quicker.

Previously, you had to click a button labeled “Hide Dock Icon…” in LaunchBar’s preferences panel. This would summon a dialog box that lists all the consequences of hiding the icon. At this point in the process, you could cancel the change, or confirm it, in which case you’d see another dialog box requesting a restart of the app.

This latter dialog also allowed you to defer the restart, however, which led to a number of weird problems. The most obvious of these being that the button label would already change to “Show Dock Icon”, even though the icon had not actually been hidden yet.

Out with the button, in with a checkbox

As soon as you change the setting, the same elaborate warning message appears. But instead of just showing an “OK” button for dismissing the dialog box, the default button says “Restart Now”. 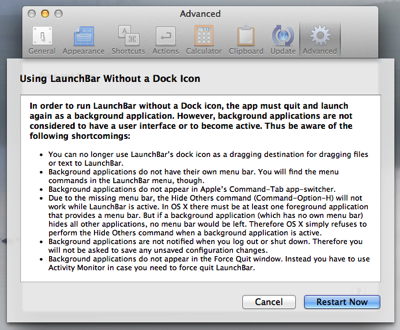 The separate dialog box for restarting the application is gone. More importantly, though, you cannot defer the application restart anymore: If you click “Cancel”, the dialog box closes, and the state of the checkbox instantly reverts back to checked. As a result, and unlike the button of the previous design, the checkbox will always properly reflect the app icon’s current hidden/visible status.

If you click the checkbox when LaunchBar’s Dock icon is hidden, the icon instantly appears in the Dock and the Application Switcher without requiring any further user interaction.

By changing a single UI control, and consolidating two modal dialog boxes into one, the LaunchBar developers have created a much cleaner, more reliable process for restarting their application.